Pentagons are the rarest normal mobs that generate around the map. However, they also spawn in the center of the map in larger quantities along with Alpha Pentagons (in the Pentagon nest). They can be killed with 22 shots of a regular tank (100 health)., making it the second most healthy polygon, the first being Alpha Pentagons. When killed, they give out 130 points of score. When fighting one, be sure to use bullets with 4 bullet damage, or else it will take a long time! 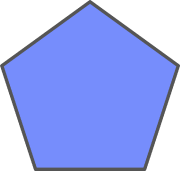 Alpha Pentagons are the mobs that generate in the Pentagon Nest along with lots of Pentagons. Their health is equal to 30 Blue pentagons (850 health). They usually spawn in groups of Pentagons. When touched, they can cause massive damage because of their massive health. When killed, they give out 3,000 points of score. If in solo, pick machine gun/annihilator/overlord to deal heavy damage to it. In teams, just use whatever you got with max bullet stats.

The Pentagon Nest is located in the middle of the map and takes up around 1/16th of the map. It is the only place where Alpha Pentagons spawn. The spawn rate of Pentagons is also much higher in this area. No other mobs usually spawn in this area, except for the kamikaze Crashers, which seem to defend the Pentagon Nest so that you don't abuse farming.