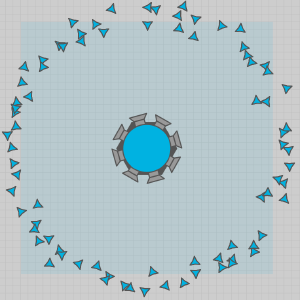 The Dominator is an entity exclusive to Domination mode. When the Dominator is on a team, they will be colored red or blue, depending on its team. As from August 25th, 2016, now players can control a Dominator if it is part of his team by pressing H.

The three Dominators share their hexagonal hull design with

Smasher, except it doesn't rotate.

Dominators will only shoot the enemy team, unless it is being contested (bright yellow) in which case it will shoot at all players. Once a Dominator has chosen a target, it will continue to fire at that very enemy until it gets destroyed or is out of range.

The Dominator has a different death than other mobs: It will respawn with full health when destroyed. If it was part of a team before, the Dominator will become contested. If it is destroyed while contested, it will become part of the team that dealt the final blow.

The Destroyer Dominator's bullets are large and travel slowly. They have a lot of penetration, but a very low reload. This can make fending off hordes of enemies very tough. When arena closer bullets collide with destroyer Dominator Bullets, the dominator bullet will alter the Arena closer's bullet direction. This is due to their infinite penetration.

The Gunner Dominator's bullets shoot fast, have extremely low penetration, and are very slow. One tank can stop its bullets as long as it has its bullet penetration upgraded enough.

The Trapper Dominator's traps are small and move fast to eventually stop. They don't have a lot of health, since they are small, but can still fend off hordes of weak enemies. The Trapper Dominator will always continue firing traps, even when the player doesn't hold the left mouse button or taps E.