Booster – The Booster looks similar to the Tri-Angle, but has an additional two cannons in the back, forming a total of 5 cannons. 1 in the front, for frontal defense, and 4 in the back, to boost. While it is not as fast as a level 30 Tri-Angle (but faster than a level 45 Tri-Angle), it is still very powerful in combat.

Booster have 3 of the most common builds (from lowest range to highest range):

Very powerful but has a limited attack because your ammo is your health.

Close-quarter combat build. Gives you both flexibility and firepower.

Provides alot of firepower but the lack of speed and health makes the tank an easy target for the enemy, espeically when your sides have no cover. 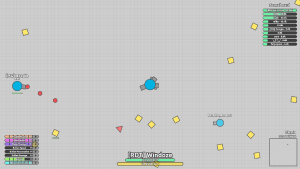